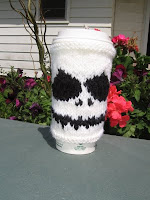 My co-worker S is turning the big 30 tomorrow and I thought it would be fun to knit her a Jack Skellington Coffee (or Bottle of Mountain Dew?) Cozy.

Since I had to make the pattern up from scratch I thought I would put all the details I could in here so if someone else out there in internet land wants to make this, they would have a jumping off point.


The Yarn: I knit this out of scrap acrylic. I had in a big bag with no labels on anything. I know the black yarn was Lion Brand Vanna's Choice in Black 153 because this was the yarn I was originally going to knit Emma's I-Matey Dog Sweater out of. The black yarn was slightly thicker than the white yarn - which made the black yarn a bit raised up in the end product - and I liked that. (Happy Accident!) The White yarn I think is Lion Brand Wool Ease in White Sparkle. Not sure about that - but that is my best guess. The finished cozy weights in around 19 grams - so I am guessing about 38 yards of white and around 6 yards of black.
Needles: Knit on size US 7 Knit Picks Needles. This was knit flat and seamed up the back.

f by going to google and doing an image search for Jack Skellington Smile Faces. This took a bit of time to find just the right image. It had to be really simple and translate well to a knit pattern. I finally found one and saved it to my computer. Then I went to http://www.microrevolt.org/ and uploaded the image into the KnitPro pattern generator. I chose the smallest size possible and Knit Portrait. I saved the pattern it spit out into my computer and then started knitting.


I cast on 48 stitches using the Cable cast on method (see great video here on U Tube for directions on this - I was doing it wrong for years!) in the white yarn.


Row 6 and all Even Rows: Knit

We then had to make 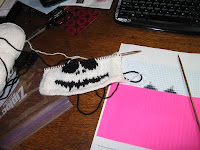 a run to Starbucks for a Venti Skinny Cinnamon Dolce in the Venti size so I would have a cup to wrap this baby around. Such a burden. ;) After finishing the coffee and giving the cup a good rinse out and wipe down inside and out - I wrapped my Jack smile around the cup to gage how it would fit and how to seam it up. I went a little loose on the seam on top where the cup is widest and then went in a bit on the seaming toward the bottom where the cup is skinny. Fit just fine!

The pattern began on row 7 and went through row 27.

Odd rows are purled and even rows are 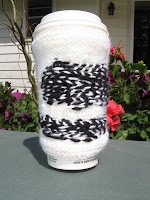 
I tried to carry the floats over the back only a couple stitches at a time and then twist them with the working yarn. Long floats are annoying to me and I was also concerned they would show through in the end. I don't have a lot of color-work experience - but am quite pleased with the end product here.