Instead of knitting last night I curled up on the couch and looked through my knitting yum that was in the mailbox. Yesterday I received the Lion Brand Yarns catalog and the Holiday 2010 Knit Simple magazine.


The Lion Brand catalog was particularly yummy this time around. I opened the first page and saw that they now have an Ap for the ipod/phone. I downloaded that immediately and then kept it by my side to investigate the patterns I saw a little further.


On page 5 of the catalog they had used yarn to cover containers - literally wrapping the yarn around a vase from top to bottom and gluing it in place. I am in heart with this idea! I just recently picked up a wine gift box thingy (think tube with a cap and pretty gift like paper on the outside) at JoAnn's that I wanted to use for some kind of needle storage. I can't help but think how good a bunch of yarn would look glued all the way around this!


On pages 8-9 they had an article about yarn bombing. The Water Tower Cozy made out of Thick and Quick was most impressive! I have spotted a few yarn bombs around the Twin Cities. Most of the time it's near a knitting shop - but not always. I love the idea. It makes me smile. Some person worked on a project and then attached it somewhere for people to see - to think about - to smile at. Love that.


The felted pillows in Fisherman Wool on page 21 are just AMAZING! They take three or more (one of them 6) skeins of Fisherman wool. That's a LOT of knitting. But man are they cool looking. The one on the front cover caught my eye IMMEDIATELY. I was sure they would not have a pattern for something that cool available - but they did! Maybe I could make a mini version. But I think scale is part of the cool facter here. I just don't see myself spending a year making one pillow. I can't even get myself to finish my shrug I started this past Spring. Seriously. I am actually getting worried that I will have a different tension and it will look weird when I finally do commit to it. Sigh. They also had some amazing felted bags - but again - we are talking around 2000 yards of fisherman's wool in order to make one. I just don't knit that fast - or much - to make them. But man are they cool!


One thing I did not like in the catalog was the felted armwarmer on page 25. It looked like a wool cast! I imagine they are quite warm - but for some reason that is all I could think when I saw this picture. Felted. Wool. Cast.

The Baby Tree of Life Throw looked pretty awesome. It only takes one skein of Pound of Love and it looks like the perfect gift to give someone with a little human in their life.

It looks like they have a bunch of new yarns too. I will be keeping an eye open at the local stores to see if I can cop a feel of these new yarns. Although I suspect the cashmere won't be found at JoAnn's anytime soon. :(

As for the Knit Simple Magazine - My favorite thing in the whole magazine - and the only thing I REALLY want to make ASAP - are the Little Owls by Susan B. Anderson. These are SO adorable. (Ok - all the toys are really cute - but the owls - COME ON! Super Cute!) I need to find out if any stores in my area carry the Worsted Cotton by Blue Sky's Alpacas. They just have to be made!

I also marked the Faux Fair Isle Set - also by Blue Sky Alpacas. Knit in super bulky yarn - it looks fast and warm. LOVE! Another one to research and track down.

There really wasn't that much else in this magazine that I marked and was WOOHOO about. It was heavy with sheer little wraps for holiday parties that look like a pain to make and are SO impractical in Minnesota. Maybe for a July wedding - But you would FREEZE at a holiday party around here in those wispy little things.

So that is pretty much all for those two.

I am still knitting away on my Diagonal Scarf Pattern that I found on the Double Ewe Yarn Shops web site. I am loving it!

I have a lot of WIP's running around right now and I am freaking out about it a little bit. I guess they are more like UFO's that I sort of ran away from. I really need to get going again on my Shrug a Bug. I have pretty much stalled out on it. You would thing mindless ribbing would be great for sitting in front of the TV - but I just can't get myself to keep going on it. I really need to make it a goal to finish it before the end of the year. I had originally wanted it done by fall so I could wear it NOW - but that is not to be. 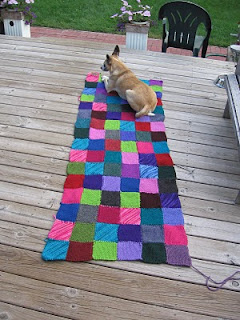 So I have made great progress on my Treadmill afghan over the last ... ufdah...7 months. I have stitched on my 6th row and I have enough squares tucked away that I could have my 7th row on the blanket done and am working on my 8th.
I weighed my squares recently so I could use my yarn more wisely. I weighed a single square and then I weighed 10 squares together so I could get a safe average. Each square weights in around 18 grams - so if I have 20 grams of yarn on my ball I know it's safe to knit a square with. I am having a lot less left overs! Nice!
As for my weight loss - I am hovering around 25 lbs lost. I had hoped to do better than that after 9 months of effort - but I can't seem to stick to the good life as well as I had hoped and I seem to bounce a lot. I am trying to look at this as a much more long term thing - and am looking toward what I will knit when I finally finish this afghan one day.
Posted by LiteraryLadybug at 9/28/2010 06:20:00 PM 0 comments