Saturday - Weight in day and a look at the next week

This week I had my smallest weight loss dropping .2 lbs. (Not two pounds, point two pounds.) Uffda. I was expecting it after last weeks biggest loss. This week has just felt hard. I did all my work outs and sweat and panted and felt the burn, but I had a hard time of it. I didn't want to do them and my head was full of excuses. My energy was low all week, I was tired and I thought I might be getting sick a few times. So overall it was just a tough week.

Next week will be better. 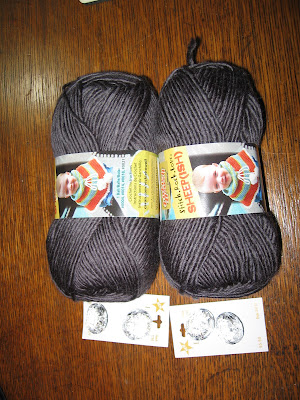 This next week I have my first KAL on Ravelry. Looks like it's being held on Facebook as well. I picked up the yarn for the KAL at JoAnn's earlier this week along with some buttons that I thought would look good for the cowl. Of course the buttons cost more than the yarn. The color is Gun Metal(ish),  and I got a couple extra balls so I could make some mittens and/or a hat to coordinate with the cowl. (All the colors of this yarn have (ish) after them - to go with the name "Sheep(ish)". That kind of makes me throw up in my mouth a little but what-cha gonna do?)

I have slowed down on my knitting as I have just been so tired at night. I assume once I get used to my work-out schedule my energy level will normalize. I have just been so tuckered out lately that it's hard to even want to pick up the needles and knit. I still knit my squares on the treadmill but I haven't done a whole lot else this week.

﻿ That hasn't stopped me from loving on the yarn and the patterns on Ravelry though! I picked up the new Interweave Knits Holiday Gifts and on the back cover spotted this number. How cute is that! I love cardigans that have just a few buttons on top. Am SERIOUSLY thinking I might need to make this. There are only three made on Ravelry and they are all in Toboggan yarn which runs $15.00 a hank and since there are only 87 yards per hank - I would need 8 hanks to make the sweater in the largest size. Sooooooo $120.00 for the yarn. $6.00 to download the pattern. Huh. Maybe I need to find a cheaper yarn..... 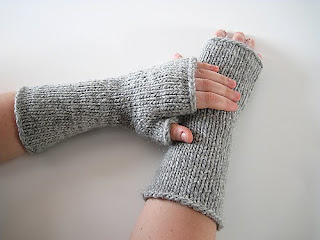 I also added One Hour Mitts to my Que on Ravelry. I have a lot of partial skeins of Brown Sheep Lamb's Pride Bulky laying around and that is the yarn this pattern was made for, so it seemed a no-brainer to add it to my Que. It's a free pattern to boot! Love these awesome designers who share their patterns for free! I still want to make a pair of Toast too. The awesome Knitting Nix keeps posting pictures of hers and I am jealous of their awesomeness. Maybe I will make a pair of toast to go with my cowl.....

Have a great weekend all!

Remember it's .2 in the right direction!! Every little helps! It can be a long hard slog but I can tell you it's so worth it in the end. I took over a year to shift the weight and there were weeks that the loss was slow, but it does eventually go if you keep at it! Cx

I am so impressed you can knit and walk on the treadmill at the same time! I came over after you left a comment on my blog and I'm glad I did! I'm your newest follower!

Don't worry hunni - I have had a dreadful eating day (well it was rather nice actually!) I am going to suffer on my scale this week. .2 is still .2 so well done! I love all the new knitting projects and thanks for the toast mention :)

You are funny and VERY entertaining! You knit on the treadmill? WOW! I was looking at that Toboggan stuff on my LYS website just a few minutes ago. I think your cowl is going to be fantastic!

@Catherine I am trying to be happy there was any loss at all. I know I will have the occational "step back" week where there is an actual gain even if I think I have done things correctly. Thanks for the warm encouragment! And congrats on your weight loss! That is wonderful!

@Annette Thank you Annette! Always so excited to have another follow on my blog! I am meeting so many wonderful Bloggers this Blogtoberfest. It's been just wonderful! I really like knitting on the Tread mill - but I think I will be giving it up after this afghan. I need to work harder on the treadmill than I can when I knit! ;)

@Knitting Nix I love looking at your Toast! I really need to knit a pair - they are so cute! Thanks for the encouragement. I think some weeks are just a little harder than others, ya know? :)

@Pom Pom Thank you Pom Pom! Your comment made me happy! I sure do knit on the tread mill. I am on my second afghan and I have also knit many scarves for charity while walking on the tread mill. I like the Toboggan pattern - but man is that yarn prohibitive in cost. I will have to look for a cheaper alternative. :) Thanks for the cowl encouragment! I will post pictures when it's done! :) Have a great day!

Wow, some inspiration there! I love when people list their "in the head" projects especially ones that are as good as yours. Well done on the weight loss, even when it's only tiny. My dearest is currently trying to lose a lot of weight and this week remained steady after a good run of losing. Like I said to him, better to lose nothing than to put it on!
Lovely to have come across your blog.

Editing - the word verification for this comment was......steadidoes, think it's saying the same as I did :)

@Becks Thank you for the kind words! Give your honey a high five from me - Steady on! :) I love Steadidoes - awesome new word!