I am starting to seek out patterns (SIMPLE patterns) of crochet items. I recently came across this pattern for a pot holder - a pot holder that I have used at many people's homes including mine growing up. I feel like we had one in dusty rose in the early 80's made out of a Red Heart acrylic. Anyway, I have been placing these pattern's in my que on Ravelry and when my mom came over this weekend she told me she spotted this pattern in my Ravelry Que and had printed it out and was making one for herself! So when I went to case on a simple wash cloth she guided me through the steps of this pattern. 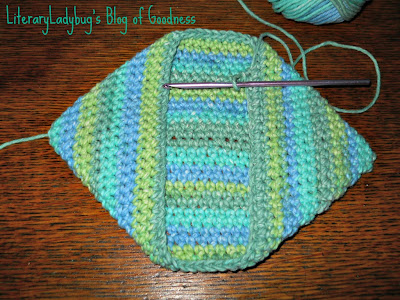 The pattern we used is the Folded Crochet Pot Holder by Michelle Gibbs on Ravelry. You can also find it on her blog The Boring Knitter if you are not a Ravelry person. It's very simple. I made the smaller of the sizes and used Peaches n' Cream Stripes in the colorway Seaside. I used 85.5 yards (78.2m) which was pretty close to all of one skein. The hook is a 4.00mm (G). If I were to make the larger pot holder I would use one of the larger skeins of cotton yarn as I don't think you can do it with the 2 oz balls.

I think the pattern is really clever and I immediately thought I would like to enlarge it and make a cute summer purse in this pattern. You work this in a spiral around a simple chain. The first couple rows are a bit fiddly, but once you get all your stitches on - and you really only have one increase row that you do pretty much right away - it's just single crochet around and around. 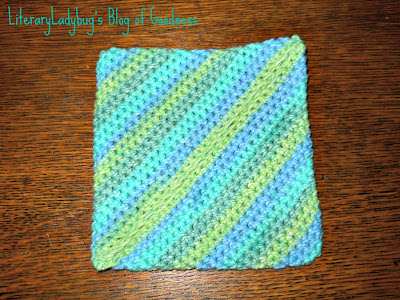 I struggled a bit with crocheting the two sides together when I got to the end, and ended up just picking up one loop on each side instead of going through both loops on both sides. I was getting a really thick spine when I went through all the loops -and it puckered weird. I still have a bit of pucker in this one - but it's much improved over my other tries. I think if I were to make this as a gift I would be inclined toward using a running stitch rather than crochet, but maybe if I make a few I will get the hang of it. The shot above shows my crochet seam going diagonal in the center. 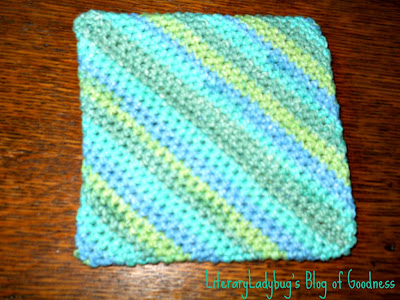 And here is a rather blurry shot of the back of the pot holder. There is a bit of a dip on the very first row I chained - which is again across the very center.

All in all I am quite pleased with how mine turned out! I cast on another one while eating my lunch today. Perhaps this one I will add the optional hanging loop, just for fun.
Posted by LiteraryLadybug at 6/04/2012 07:18:00 PM

Ooooh I think that is clever...I can't work out how it works so I would have to check out the pattern. :) x

Very smart and nice, think I have to make this some day

@Susses spindehj�rne Thank you! I really like the pattern. It's a great take along project for the car or waiting rooms. Easy to tote and easy to work on! :)

I love these. I have made a bunch of them in various sizes for pot holders and coasters too!

@HaleDanielsI love the idea of coasters! I may have to try that!