You can tell I am sort of running out of names for hats. I was looking for a pattern in Creative Knitting, Fall 2010: Accessorize with Style and came across this pattern for a simple cap in a Single Skein of Blizzard Yarn. Why I would have purchased a single skein of a yarn with only 66 yards on it - I have no idea. I think the color and the squish factor made me do it. (Apparently this yarn is now discontinued which just makes me sad. It was so yummy!) 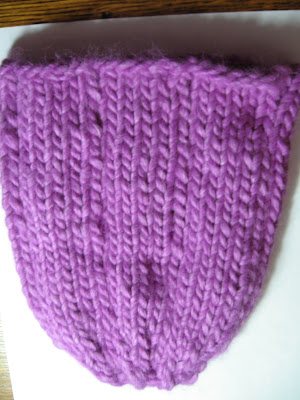 So I cast on and quickly got through the body. And then as I was getting ready to knit the last couple rows I noticed a twisted stitch half way up the hat. On sock yarn this would not be a big deal - but when you are working on something this bulky it REALLY stands out. So I frogged it and started over. Second attempt I got into the final rows of decreases and realized my stitch count was off and it looked BAD. Frog frog frog. Third time I managed to knit the hat correctly! So really I made the same hat three times in one day. It's a wonderful pattern. Very simple and I really only used about 50 yards of yarn. 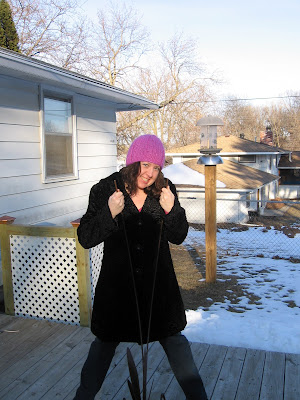 It's one of those hats you just want to pet because it's so soft and cuddly. The rib keeps the hat from rolling up. A really warm hat. Instant gratification. I think I will keep the pattern handy as it would be excellent for one of those "Oh crap!" moments where you need a hand knit gift immediately. (Shocking how often that really does happen!) I might need to troll the Internet for more of this yarn.... It's really nice! 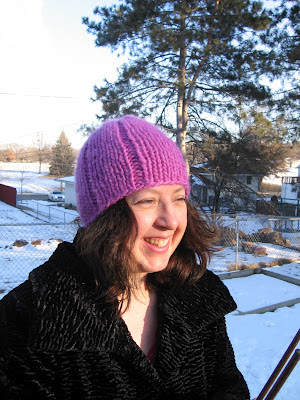 Cute and in my fav. color. I like the smilling girl too ;0)

@Susses spindehjørne I like the color too! It's a really soft and Squishy hat. I have it sitting on my desk so I can reach over and pet it. :) Thanks for the compliments! :)

@Inthesky It IS a happy hat. I have worn it a few times now and it really keeps the wind out. And THAT makes me happy! :)