Immersion Blender - Where have you been all my life?

So I have been looking at a few toys quite a bit lately. Kind of chewing on the idea of them like a dog with a bone. One of them is a Dutch Oven. I don't own one and I want to. But do I buy a cast iron one? Do I buy one from Rachel Ray? Tough decisions and a lot of time spent looking at them in stores and on-line. The other one is an immersion blender. I have wanted one for awhile, but recently got really obsessed with the idea of one. So I finally leaped into the abyss and ordered one on Amazon that was in my price range (Under $30.00 US and free shipping), had pretty good ratings, and was easy to clean. This is a picture of my new immersion blender and since I ripped off the picture from Amazon - here is a link to look at it on Amazon as well. ﻿ 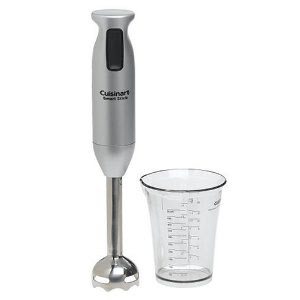 I got my blender yesterday and we ran to the store a few hours later to get the makings for soup. My first soup is a Butternut Squash Soup recipe that I got off Weightwatchers.com. A simple soup with just a few ingredients: Squash, Vegetable broth, an apple and an onion. The recipe called for a Vidalia onion - which I couldn't find at my local store, so I just chucked a yellow onion in there. It was really easy - although it took longer to cook than the recipe suggested as I would not crank the heat up to high until I got a good boil on. Bad for the stock pot! So I had to wait a good half an hour to get a boil at medium heat. Then I had to let it boil until the onions were translucent. Then I got to play with my new toy!
I hauled the pot over to an outlet (placing a pad on the counter for the pot to sit on) and placed the immersion blender into the pot almost touching the bottom of the pot. There is a nice guard on this model so I was able to rest it on the bottom of the pot without hurting anything. Oh was it fun! I had to use both hands to control the blender and it just went to town on the soup! Soon all those large chunks were blended into a smooth as silk soup. YAY! 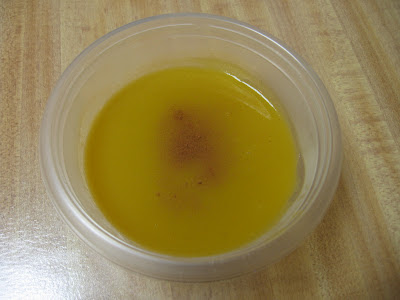 I poured myself a bowl and had to taste it immediately. Good but it needed a little something. The recipe said to garnish it with a little nutmeg, but I didn't have any on hand so I ended up adding a dash of cinnamon on top and then threw in a small handful of oyster crackers. Perfect! I think a side of homemade Rosemary bread - thick crust and full of butter - would be the perfect side to this. But since I am making this to sublimate my Weight watchers diet, that is out for now. When I get into maintenance mode I will so make some crusty bread to go with this recipe! I am thinking about using it as a low cal sauce to top some ravioli though. I think that could be very tasty! 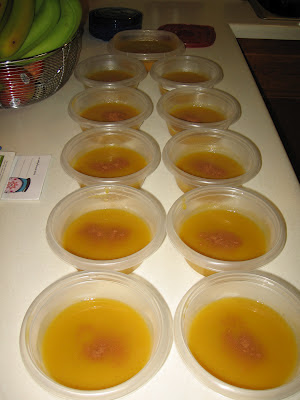 I ended up with 12 double servings (One Points + per bowl!) and froze all but two. Now when I am craving a snack I can grab a bowl of homemade soup from the freezer and have a healthy snack. Go me!

I love my little whizzer, I am on about my fifth, I am always devastated when they give up the ghost and can't live without one. What a great idea to freeze the soup in ready little portions...go you! Don't forget to share more recipes as you get creative with your whizzer. They are great for smoothies too. :)

@Susses spindehj�rne It's really yummy! I am quite proud of my Soup! :)

@inthesky I am pretty happy with mine! I ended up picking up some mushrrom/garlic/cheese ravioli this morning and had them for lunch with the Squash Soup drizzled over the pasta. It tasted fancy restaurant good! :) I have Veggie soup on the stove right now - can't wait to attack it with the "whizzer"! :)

Mine's called Henry :-) Really, he has a face on him and is bright yellow and called Henry! I love him!
Lori xx

@Hippywitch I love that your's has a name! That is awesome!