As part of my "Yay I am turning 40! Let's take the week off Vacation Extravaganza" we decided to go on a final camping trip. We have an old camper that we fixed up and that we haul around the state for our adventuring. This is the latest we have ever gone camping and it was a truly unique trip.

We stayed at Jay Cooke State Park which is just south of Duluth, Minnesota and about two and a half hours North of where we live in the Twin Cities. We headed up there on Monday afternoon and when we arrived found the park was pretty close to empty. The water for the park was shut off which translated into Vault Toilets and no showers. I am trying to embrace my rugged outdoor girl more and more. I have to fake it sometimes, but I am working on it. (Truth be told, vault toilets and wood ticks freak me the heck out!) So we picked the spot we wanted and then set up our camper. Then we had to run to town for supplies. This ended up being a run to Duluth since the nearest town to the park is Carlton, MN and the population is around 850 people. They had a grocery store but it was closed by the time we got there. So off to Duluth for some groceries and supplies. Then back to the camper where we had our dinner (Peanut butter and jelly sandwiches and goldfish crackers) and then to sleep.

The next day was cold and wet. It ended up raining on us off and on the entire trip. But we were determined to get some hiking in - so off we went! 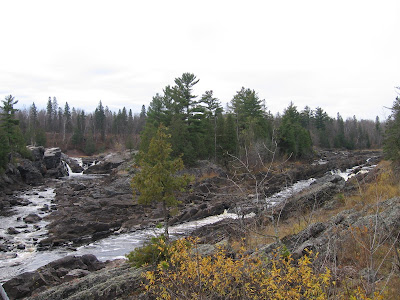 The trails we followed surrounded the St. Louis River. The leaves were past season, and it was raining off and on, but it was still a really amazing hike. It is also the hardest hike I have ever been on and I am still soar as I write this two days later. I have never been on a hike where I actually paid attention (and had gratitude toward) the trail blazers before. Spotting a hot pink piece of plastic tape tied to a branch on this hike was reassuring. 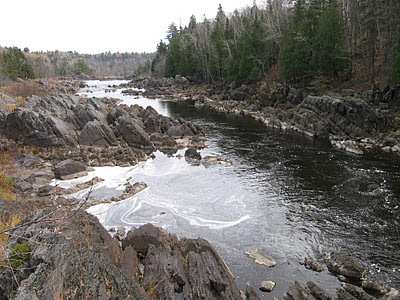 The rock formations were really interesting here. The trails were littered with rock and all through the town and the camp grounds there were interesting protrusions of rock. Fun to look at. 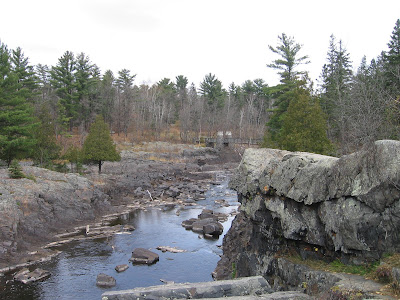 In the background you can see the swinging suspension bridge that we had to cross to get over the river. The dog was less than thrilled at the noises the bridge made as we crossed it, but once we got to the other side Emma was all "YAY! Let's go!" and was practically pulling us along the trails for the first leg of our hike. 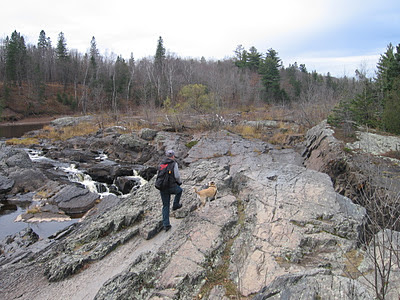 Tom and Emma climb some big rock formations on the river. These get slippery when it rains. I am just saying. Pretty though. 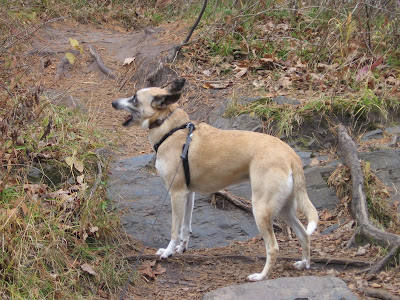 Emma had a hard time holding still on the hike. I am pretty sure she is telling us to get a move on! in this shot. She was one tired puppy when this was over and slept really well for the next couple days. It was great to get her out on a long hike. You can see the rock and tree roots that were the norm on the trail in this shot. The rock was slippery when it rained and we had to navigate some spots that were pretty much bogs they were so muddy. 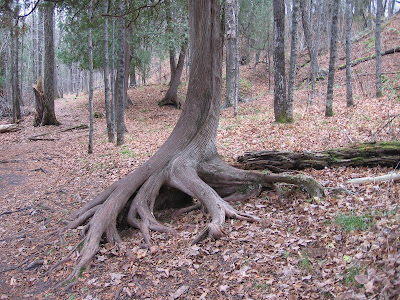 There were a lot of tree roots that looked like this as we made out way through the woods. Images of Frodo danced through my head as I admired the lovely hobbit holes the roots made. We talked a little about how I could incorporate this kind of image into my knitting. That was when we had the energy to talk. Did I mention this hike was three hours long? Yeah. We were TIRED when we got back to the camper that afternoon. Just exhausted. 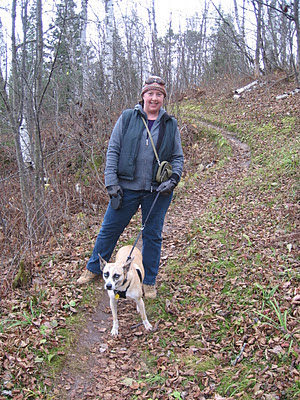 Tom stopped and took my camera and snapped this shot of me as we were heading down another hill. The trail wound up and down and up and down the side of the river. I am wearing Tom's gloves as I forgot to bring any mittens or gloves with! DOH! Emma is still raring to go at this point - and I am starting to get tired.

So the hike lasted about three hours and we took a trail marked "Difficult" on the map. It was challenging, that's for sure! I had to scoot down some rock formations on my butt once or twice. And wow - is a hike in nature a different work out then tread mill and Zumba! I am really glad we did it and I will not forget this camping trip anytime soon. A fitting end to my 39th year and to our 2011 camping season.
Posted by LiteraryLadybug at 11/03/2011 05:12:00 AM

It looks great! Enjoy the rest of your holiday. xx

@Knitting Nix Thank you! I have been just lazy girl since I got home. Feels nice! :)