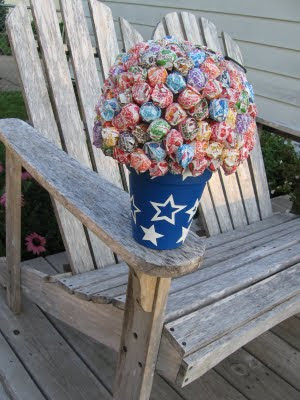 I made a couple of Lollipop tree's last month and they were a hit! I had found a photo of it on Pinterest.com and then followed the link through to this site http://meetthedubiens.blogspot.com/2011/06/lollipop-tree.html where the directions were. I went the hard road and primed and spray painted the pots. Let them dry. Then used Styrofoam glue to glue the foam balls to the pots. I also decorated with giant star stickers (only $1.00 a sheet at Michael's were I got all the supplies) and then loaded with Dum Dum suckers. (I got about 175 suckers on each tree.) I took one to a family picnic (giant hit) and the other I took to work for the break room. Fun and pretty easy. I think it would have saved a lot of time if I had used a pre-painted pot, but I had the spray paint & the Tera cotta pots were so cheap compared to the painted ones.
Also - I had the thought that gluing the balls to the pots makes the pots worthless after the suckers are gone - but I was worried the weight of the suckers would tip it over - so I just glued it on.
Posted by LiteraryLadybug at 8/14/2011 09:43:00 AM