The Olympics opening Ceremony was last night and I was finally able to cast on my project! I am making the Colonnade Shawl by Stephen West. It was supposed to be my first Stephen West project, but as I researched this for the games I got swept into the Westknits Mystery Kal. These things happen. 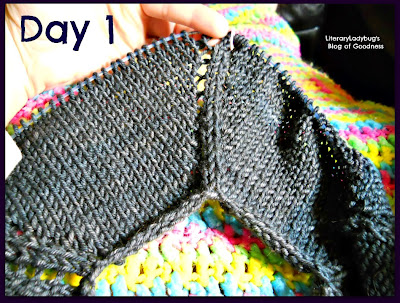 I am very happy with my first days work. I had been up for 14 hours by the time I could cast on and was already pretty tuckered out from a long work week, but I was very exited about the games and the new project. I am knitting this in Sun Valley Fibers MCN Worsted which is just HEAVEN! Very soft and lush. I would work with this again in a heartbeat!

I knit until my hands were clawed and I was so tired I could hardly stand it. Then I set my knitting aside and watched Sir Paul McCartney sing Hey Jude. An interesting opening ceremonies. I wish it had been broadcast without commercials as I know they cut a lot of stuff out. (Although the commercials were good bathroom and stretch points, so they had their value I guess.) 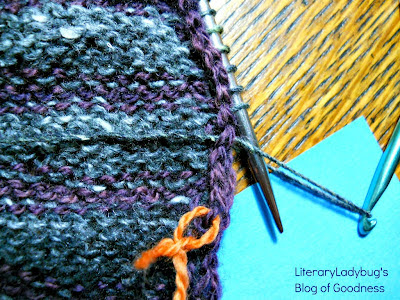 Progress on my Westknits Mystery Kal will pretty much stop while the games are on. Clue 3 was released yesterday and although I read it and looked at the boards on Ravelry about it, it will be a while until I get to it. I am not quite half way through Clue 2 at this point.

Above is a photo of me using a crochet hook to pick up stitches on the icord edge. I tried over and over to pick up the stitches with my knitting needles, as the moderators for the KAL insisted that this was the easiest way, but it just didn't work for me. I need to remember that not everything works for everyone and I have to find the path that works for me with my work rather than trying to force myself to do something the way someone else tells me to. Honestly I felt a bit bullied by the attitude of the moderators and like there was something wrong with me for not being able to pick up the stitches the way they said too. I think it was just a very simple skill for them and they were a bit surprised at even needing to explain it to people.  There is a bit of snobbery on this Kal - it's not terrible, but there is a bit of an attitude that people with a lower skill set are needing a lot of help. I am still really happy I am doing this and my skill level is much higher than it was before I started it, but I can't help but feel a little feather ruffling at the snobbery.

Not taking part in the games but just wanted to say how lovely to have finally found your blog again! I had you bookmarked rather than followed so when my laptop died I lost most of my fave blogs.
Lesson learned and follow pushed!
Love the Fugly blanket, last time I saw it you were only just at the very beginning. It's curiously pretty if that makes sense?

@Becks Hey Becks! Nice to hear from you again! Bummer on the loss of a laptop. My computer died last year and my hubby's went down this past winter too. You realize how much of yourself is tucked into one of those when it suddenly goes away!

I love my Fugly blanket! I get what you mean about curiously pretty. It's fun to look at but it's not necessarily pretty in a classic sense. :)

Nice to hear from you again and I hope you have a lovely weekend! :)

It looks great, good luck to you in the game ;0)

@Inthesky I had a really hard time staying up for the whole thing as well. I had to stop knitting before the ceremony was over and I was practically drooling on myself I was so tired at the end of the thing. :)

I hope you have had a wonderful vacation! I have missed reading your blog! :)

@Susses spindehjørne Thanks so much! :)