It's Fugly and it's Finished!

I HAVE FINISHED MY FUGLY BLANKET AND I LOVE IT! 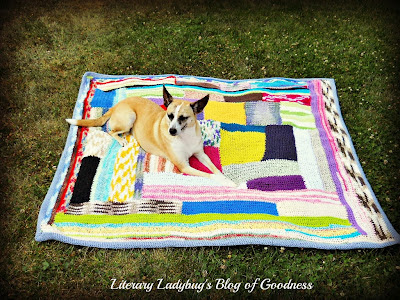 This took me four months to hook up and it was a real learning experience. It was really fun to just grab a ball out of my scrap bin and add it onto the growing blanket. I methodically weighed each scrap and ball on my handy scale and recorded that on note cards to enter onto my project page on Ravelry. My yardage ended up being 2620.1 yards although that is a bit of a guestimate since most of my scraps did not have ball bands, but I think most cotton yarns have similar weights and yardage per gram - so I am pretty comfy with my guestimate. (You can read the list with all the weights and stuff on my project page on Ravelry.)

Sometimes I would try and place colors next to each other - and sometimes I would "need to work with pink" and would just add pink yarn where ever it landed. I started out thinking I would just use up my scrap bin, but I ended up running out pretty quick, so I found myself crocheting wash cloths on my lunch hour and then going home that night and hooking the rest of the ball onto the blanket!

Emma enjoyed me placing a blanket out on the grass for her and she had some nice rolling around on it. Any time I lay out a knitting/crochet project she has to come over and lay down on it. It's funny. I appreciate her being so kind to my knitwear though. She only ran off with one hat and no damage was done. And she's just the cutest little model! 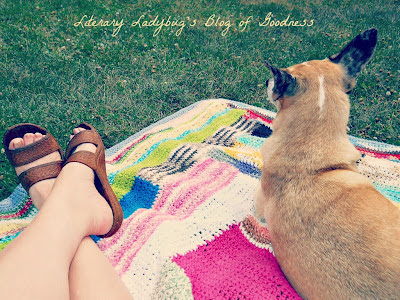 I did a test run for possible future picnic's and the size is really good. I can sit here and have a nosh with Emma no problem. I think my hubby could even squeeze in! Nice! :) 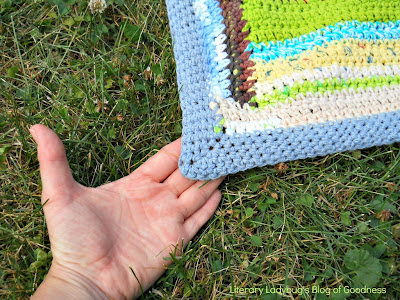 Here's a shot of the denim blue border in single crochet. I think I did 6 rounds but it might just be five. I have a hard time counting rows still and I didn't track this as I went. I just added rows until it told me it was done. The corners have three single crochet into the corner stitch for the turns. I think a darker border would probably look better (in hindsight) but this color is more pet hair forgiving - so I call it a win.

There is also a little bit of pucker from my border - but not enough to really bug me. I suspect going from Extended Single Crochet to Single Crochet may have been part of the problem here - but I like the slightly denser fabric around the edge of the blanket. 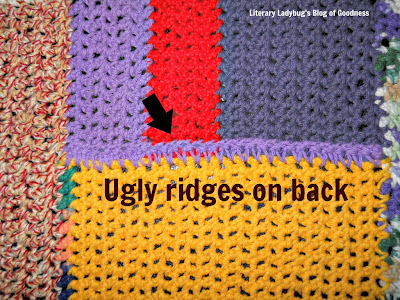 I did crochet blocks of color together in areas which left ridges all over the back. I decided they bothered me too much and went back and sewed them all down. Not very pretty - but like I said. LEARNING EXPERIENCE. Also - It's called a fugly blanket - so yeah. No pressure to look pretty. 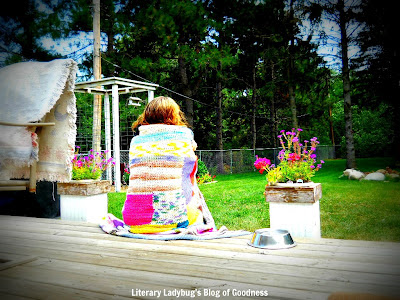 The size is perfect. I can wrap it around my shoulders and it just reaches my feet. Since it's all scrap cotton I can wash and dry the crap out of it. If I stain it I can bleach it. And it sleeps like a dream. I finished sewing in my last stray end last night and within 30 minutes after I did that I was sound asleep under it in bed. Just love it.
Posted by LiteraryLadybug at 7/12/2012 05:59:00 PM

What a wonderful blanket!

@Inthesky It makes me soooooo happy! :)

@onecookbookatathyme Thank you so much! I love it!

I love it! So, so warm and comforting - we should all have one of those xx

@Mrs Thrifty Thank you! I love it too! And I agree - everyone SHOULD have one! :)

Love it and what a great way to use up all the oddments :-)
Emma seems to approve!
Lori xx

@HippywitchEmma gave her paw of approval on this one! It was fun to use up all my scraps and I really enjoyed making it! I have slept with it everynight since I finished it - FAB-U-LOUS! :)