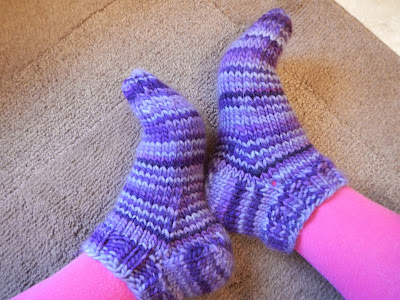 I cast these on in December of 2011 and then apparently stuffed them in a bag and completely forgot about their existence. Fast forward two years and I am doing some cleaning and organizing, and hark, what is this? I honestly do not remember casting these on and working on them, but I have notes on Ravelry stating I did (apparently cast on while watching The Biggest Loser).  So I decided to quick finish them up so I could wear them this weekend. Monday is supposed to be so cold here that the governor of Minnesota closed all schools in the entire state for that day. Before the Wind Chill is factored in they say a high temp of -10°F and I have heard colder than that on some channels. Yikes. So having a paid of bulky wool house socks sounds mighty fine to me! 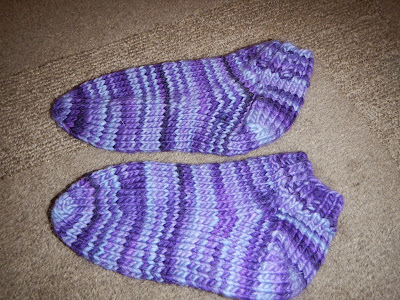 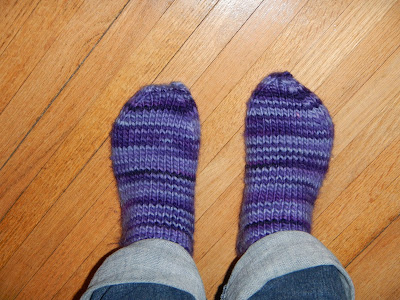 As you can see by looking at the toe construction, I decreased more on one toe than the other. I think I got confused about which size I was working on and followed the directions for the small sock on the first sock. When I finished it I was not thrilled with the toe, but I thought Well, if I make these again I will change the toe construction - because I am not an elf and my feet aren't shaped like an arrow.
Then I finished the second sock and realized it was a Jenny oops - meaning I fudged up that first sock. So I have a pair of house slippers with wonky toes and I know that if I make them again I need to REALLY watch that toe construction. 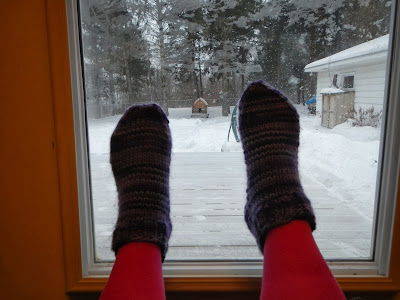 I wore these all last night and my feet were toasty warm in them. When it gets cold like this you can just feel the cold seeping in through the walls and floor of the house, so I am pretty sure these will get some good wear for the next few days/weeks.