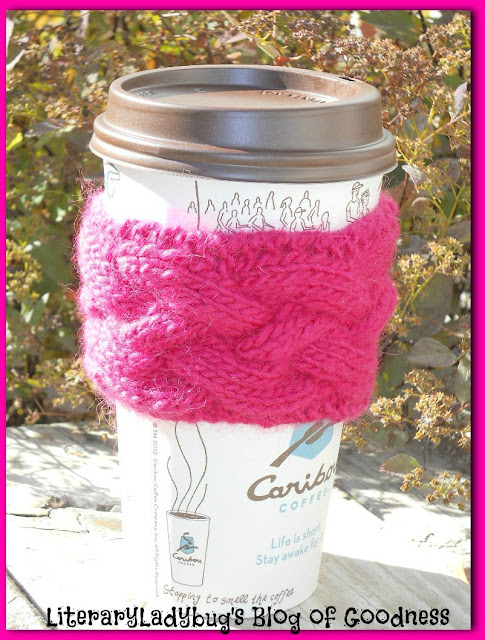 Our local Target has a Starbucks in it, so after a shopping haul I will occasionally indulge in a nice big cuppa Joe. This last time I pulled out a cozy I knit to wrap around my coffee and it was so icky. You know how stuff gets when it's been in the bottom of your purse too long and even though your pets don't go in your purse somehow (magic?) their hair does go in your purse and will collect on any knit item you carry. So I was a little embarrassed by my hand knit cozy covered in paper scraps and dog hair and decided to make myself some new ones.
The Pattern: It is a free pattern on Ravelry called "Woven Cable Coffee Cup Sleeve" by Linda Thach.
The Yarn: I used left over worsted weight Brown Sheep Lamb's Pride 100% wool. I used 21 grams which is about 36 yards (33m) of yarn.
The Needle: I knit this on Size 5 needles, and I used double points. I just thought it would be easier with the cables to have the double points. When I make this again I will do it on straight needles instead of double points, but I will probably keep the dp's handy for the cables and for the provisional cast on.
The results: I really like it. I learned how to do a provisional cast on and then kitchnered the two sides together in the end, although you can cast on anyway you like and then just stitch it together as well. I had never done a cable like this before either, so it was fun to learn a new cable. I almost always hold my stitches the wrong way when I cable, and this was no exception. I had to rip out after a pattern repeat and start over. (Why do I find Front and Back so confusing?) Anyway - now that I have made this once I am eyeing other left over balls of yarn and thinking about how many coffee cozies I could have in a week or two! What else can you make with 40 yards of left overs?
My project notes on this can be found on my project page on Ravelry "Pretty Pink Cable Cozy".

Thank you so much for the recognition! Looks great in pink!

Thank you so much for the recognition! Your sleeve looks great in pink!

@Linda Thank you for a great pattern and for making it available for free. This sleeve is in my purse as I write this and I still use it frequently. Held up well and is still so pretty! Thanks Linda!