I have lots of stuff I need to get done lately. I have lists and lists of projects to get done. So much so that I found myself a little overwhelmed by it and found myself crawling into bed this Sunday and having a lazy day while I hid from all responsibility. I Generally try to be a grown up and just get stuff done - but every once in awhile a day off from everything is in order! 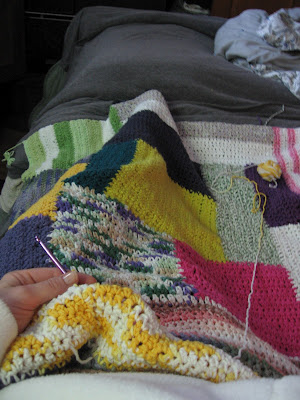 My dog spent a lot of time outside with my hubby while he worked on projects, and I propped myself up with pillows and worked on my Fugly Blanket. My cat Izzi curled up in the blanket at the end of the bed and spent most of the day just hanging out with me.  This is unusual since she is more my Husbands cat - but I enjoyed her company! 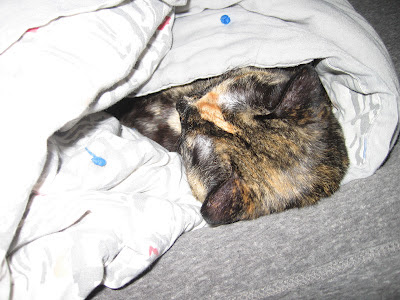 I had to poke her head a little to get her to stretch and say hi. She curled right back up and went back to sleep. I even dozed a little. With crochet in hand my head bobbed and the next thing I knew it was 10 minutes later. I felt like a really old woman who nodded off after tea! (But in a good way!) 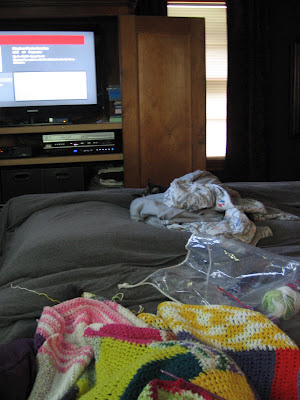 Another shot a couple hours later. Yup - I spent all day in bed! It was awesome. You can see the yellow and white I was working on earlier at the bottom of the blanket. I have moved on to Hot Pink!

And you can see Netflix in the background. I am watching Stephen Fry in America. Really interesting! Although (of course) I wanted him to like Wisconsin and Minnesota more. About Wisconsin (The state I was born in and lived in for 30 years) he complained that Americans eat terrible cheese and that he couldn't believe that the water bottle he left in his car over night froze solid! (This was really funny to me.) And as for MN, he did travel on a road near where I live and it was nice to see familiar landmarks, but he pretty much talked about our Hmong community and then went ice fishing with a rich guy. (Most Minnesotans do not bring a fish camera with to see the fish in the water bite on their line.) I was laughing about this because the time I went ice fishing (once mind you and it was in the 80's) we had no power auger and it was just standing out on a frozen lake freezing our nubs off. In the show they drive up to their spot on snow mobiles geared up in expensive winter gear. It was funny. So of course I felt like we weren't represented very well, but it was still interesting.

It was a really fun day and I needed the relaxing, but now I need to get back to my various lists and get some projects done! Back to Reality!
Posted by LiteraryLadybug at 3/27/2012 05:36:00 AM

What a great day, I think you have needed to spend it this way ;0)

@Knitting Nix I enjoyed it SO Much! I think I just needed a little reboot. :)

@Susses spindehjørne I think so too! Everyone needs a little down time once in awhile. Although it may be addictive. :)

Ohhh heaven, good to see you had some furry company :-)

@Hippywitch It was nice to have her hang out with me while I was lazy. A very relaxing day!