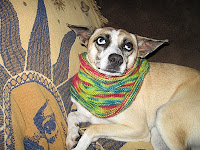 It's Thursday and I want to try and talk about Emma On Thursday's. Honestly not much is new in the world of our awesome Dog. We had a storm last night and that always causes worry for miss Emma. She hates the thunder and the lightning and tends to cower and shake when she hears it. Last night Tom came back from his bike ride as the rain was really starting to hit and he reminded me that it was good to close all the curtains and make the house into a Puppy Cave when the weather turns sinister. Sure enough - She settled on the couch and calmed down while I sat on the other couch and watched Hoarders on demand and knit my Malabrigo cowl. She forgot at one point that it was raining like mad out and asked to be let out. When I let her out she took one step out onto the deck and turned around - tail between her legs - and headed right back inside. Memory of a goldfish? Not such a bad thing. I prefer she push her fears away. I think the best thing we can do for our fearful pup is to try and be steady and calm.

This week has been a tough one for that. I went back to work after a pretty blissful week off for my Birthday. After spending one of my Birthdays working at the store and having to scoop vomit out of the sink in the customer bathroom - I vowed to try like mad to never work on my B-day again. Last year I had to work on my Birthday due to staffing issues - but this year I was able to take the whole week off. Awesome! Sadly - my week back has been mighty stressful and I have been tearing my hair out almost everyday. Which leads to me coming home and ranting and stomping about like JenZilla. Not a great way to keep the dog calm and happy. I try on days like that to run with her in the yarn a little more than normal to make up for it.
Hows the weather up there?
We actually had a record warm day yesterday and today has been mighty nice too. They are saying snow for this Sunday - so it's NOT going to last. (Hello - MN and November? Our day's are obviously numbered!) We are putting in new garage doors this weekend which I am really happy about. Our doors are falling apart and we have to stand there and guide the door down when we close it. I can't imagine pushing the button and walking away from the door. It will rock! Also - Our current doors are ugly as all get out - so it will gussy the joint up to have pretty new doors with NO rotten chunks falling off of them. Sweet. I am sure it will make the rest of the place look like hell in comparison - but you got to start somewhere. And since new windows and siding are not in the budget - this is what we get for now.
Stick it & Stuck it 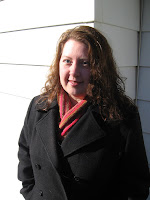 I have finished a few projects since my last blog post. I have been on a cowl frenzy. I love them! I can wear them at work without them getting caught in books and chairs and toilets (Nobody likes a toilet dipped scarf!) and they are really warm. Also - they don't add as much bulk to my ample bust line and equally ample stomach line. I knit the Mochi Plus Cowl out of two skeins of Crystal Palace yarns Mochi Plus from my stash. The pattern is really simple and I loved it enough that I cast on almost immediately for another one out of another ball of yarn in my stash.

This time I knit the cowl out of yummy Malabrigo. I used 1 skein of worsted weight and I named the cowl "Clown Vomit Cowl" because the color is awfully like what I imagine it would look like if a clown horked up a colorful stream of yarn. It turned out great and I wear is just as much as I wear the first one I made. But after making two of the same pattern I started to get a little weary of the pattern - which is pretty much knit knit knit with a little purl purl mixed in. I would love to do this cowl in a softer color variation instead of the crazy colored Yarn I am so drawn to - but I think it would bore the pants right off my bum to knit that. (The picture at the top of the post is the Clown Vomit Cowl - Emma was as usual an awesome model.) 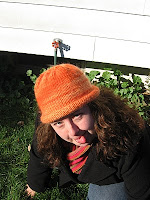 After the cowl madness had released me from it's grip I whipped up a simple hat out of Brown Sheep Lamb's Pride Bulky that I named "Orange you glad I didn't say Banana?" You would think after knitting on my treadmill afghan for the last two years I would be sick of looking at this yarn - But I am so not sick of this yarn. I love this yarn. It's warm and easy to work and has great colors. And just the right touch of mohair fuzzy goodness. Love that yarn. Don't think I will ever NOT love that yarn. It felt's well. It knits up really nicely. I made a bowl out of it once and it's just the prettiest felted wool bowl. I think if I had to make a list of top ten favorite yarns - I would have to include Brown Sheep Lamb's Pride Bulky. It's just that awesome. I know Bulky isn't for everyone - but it's for me! 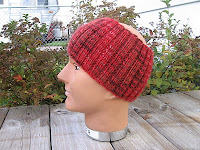 s Pallete single worsted yarn). I named it Keep them Ears Warm and it does indeed keep my ears warm. I love this headband. When I finished it I wore it almost all night long. I took it off for a minute or two to see how Emma looked in it - fabulous - and then made Tom try it on as well. It's super awesome. I knit it out of some left over yarn I got at a shop many years ago. I had knit my Sunset Hat out of it a few years back and still had a lot left over. This headband only used up about half a skein - so I still have a little more than one skein left. Perhaps it will be a cowl? 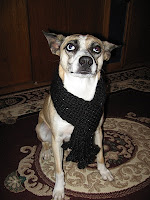 And finally - I finished a One Skein Scarf out of the book One Skein Wonders. It's the Filippi Scarf from the lady who used to own Clickity Sticks - whom I got almost all my yarn bins from when they went out of business. I called this Oooh Baby Baby! because it's knit from Plymouth Yarn Baby Alpaca Grand and it's so soft and yummy! It's black with a bit of silver metallic woven in. The pattern was really easy and I did it MOSTLY right. Sadly I bound off the way I always do rather than with the k2tog method the book called for - which made one of my ruffle d edges more ruffled than the other. But still - it's pretty awesome! I mean seriously - running alpaca yarn through your hands over and over for hours - it's pretty awesome. (Emma Once again modeled for me.)

On my needles right now is (wait for it....) a cowl. I know! It's the very popular Birthday Cowl by Nova Seals on Ravelry made out of yummy Malabrigo worsted yarn I got as a Birthday gift from my friend Abbey. I am calling it "It's my Birthday too!" and I have been working on it pretty hard since I got the yarn on Tuesday. I came home - balled it on my swift and cast on as fast as I could. I love the pattern! It causes the edge to curl in a gentle wave. It's just wonderful - and I have taken it to work with me everyday in hopes of showing Abbey it's awesomeness. She has been out most of this week - so I will try again tomorrow. Love love love it!
Posted by LiteraryLadybug at 11/11/2010 06:01:00 PM