Our local community has a Farmers Market on Thursday's in the summer. I have been hitting it as often as I can this last month and have been getting just yummy fresh produce, bread and some Chipolte Bar-B-Que Sauce that I could put on almost anything. (Love it!) Last week I decided to pick up some Zucchini and make Zucchini bread! 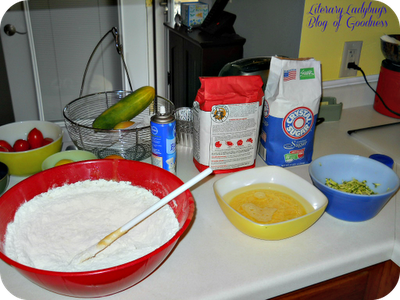 I had never made Zucchini bread before, so I searched for recipe's and settled on this one by Paula Deen. It had a video to go with it and she made it seem so easy and effortless that I was enchanted.
So Thursday I picked up Zucchini at the farmers market.
Friday I picked up supplies for the bread like a grater for the zucchini, and fresh ingredients. I had flour and baking soda - but I have no idea how old the stuff was and I thought fresh would be better.
Saturday was rainy and my husband was gone for the day - Perfect day to mess up the kitchen! 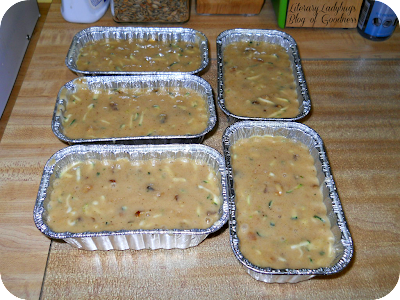 I went with these cute little aluminum pans. They were pretty inexpensive and I thought they would be better if I decided to gift any loaves to neighbors or co-workers. This worked out great as I was able to make three batches in a row and just get them all ready for the oven. The oven was the slow down since I could only do 4 or 5 loaves a time. But it worked well since I was able to clean the mess up while the loaves were cooking. 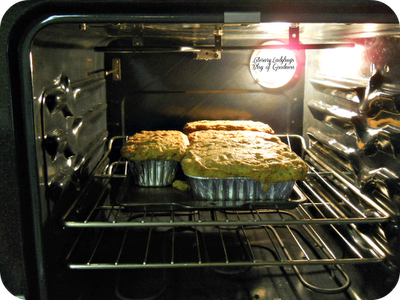 I cannot tell you how amazing the house smelled while I was baking these up. The cinnamon and nutmeg were heavenly scents! This is the first batch I made and I overfilled the pans as you can see. They kind of exploded over a little. I adjusted as I want and used 6 pans rather than 5 per recipe and this worked out well. I also shaved a couple minutes off the cook time as they came out a little darker when I cut back on the batter per pan ratio. 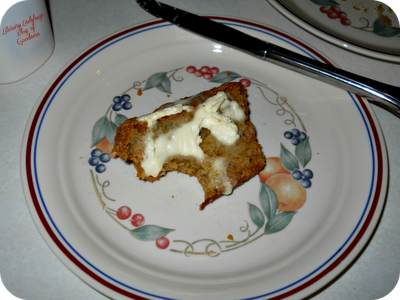 A hot cup of coffee and warm Zucchini bread slathered in (light whipped) butter. Oh num num num. I don't think I have ever had Zucchini bread fresh from the oven. I cannot tell you how good it was! 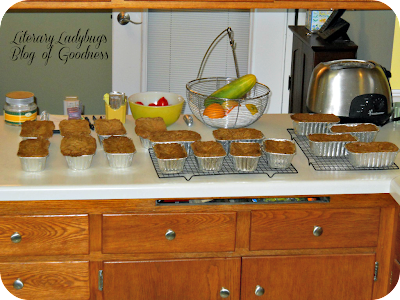 And here is my days work minus one cut into loaf I had placed in the fridge. I wrapped them all in heavy duty aluminum foil after they were nice and cool and filled my freezer with them. I had a really nice day and enjoyed filling my freezer with such tasty bread!

Looks yummy. I haven't made courgette loaf for ages, will have to bake some when I get my full energy back.

@Becks It's really tasty and I am quite proud of my first attempt at Zucchini, or as you say Courgette bread. I am tempted to make more since it's in season right now, but there are only two of us here, so... maybe not! :)

Nice to hear from you Becks!

@Inthesky It's hard to make these WW friendly isn't it? :) I followed Paula Deen's recipe so you know it's not a light bread. Tastes great though! I just have to stop after a piece or two. That is the challenge. I think my hubby ate an entire loaf yesterday before bed.(lol)

I love Zucchini/courgettes! I had some for dinner the other night by just slicing them into a pan with a little (small pat) of butter and some minced garlic and a little fresh parmessan over the whole thing. Very yummy and filling.

Oooo looks yummy, I bet the house smelt fabulous! You seem to have some production going there making that much!

@Hippywitch It ended up being a long day of making bread. The baking and the cooling time took the longest. And yes - the house smelled so nice! It was a great day!